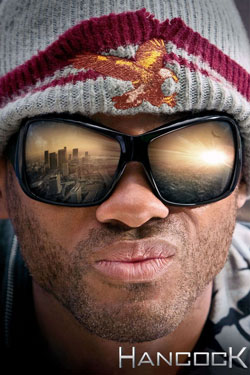 Another DVD I found in the discount bins is Hancock by Peter Berg. I saw the trailer ages ago, and I liked the idea: Hancock, a super-hero played by Will Smith is basically a bum. He saves the life of a PR guy (Jason Bateman), who decides to fix Hancock’s image, despite the reluctance of his wife (Charlize Theron).

I was actually pleasantly surprised by the plot, that is, there is one. I was thankful that the movie did not stretch the initial PR-guy & Bum couple idea through the movie. Still, the movie is all over the place: at times I had the feeling of seing a movie from the 80’s like Ghostbuster, then there is something deeper about Hancock’s solitude, then a plot twist and we have another style, with some basic comedy inserted randomly.

While Will Smith plays the hunkering drunk super-hero pretty reasonably well, his performance does not match some of the things we learn later; Charlize Theron does the hostile housewife pretty fine, but I was not really convinced by Jason Bateman’s performance. The idea of an idealistic and naive PR is not very credible, and he overplays this to the point where he is less believable than people with super-powers. I think the movie would have been better balanced if he was more cynic and intelligent, more grown-up.

In conclusion, the movie is not bad and seems to have done well enough to justify a sequel, but then again, what movie does not get a sequel nowadays? It is an acceptable comedy, which is a shame because I have feeling it could have been more.