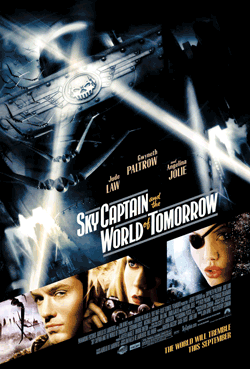 I don’t watch many movies, and given my backlog, I can just wait until movies appear in the discount bins to grab the DVD. Yesterday I bought a batch among which there was a copy of Sky Captain and the World of Tomorrow, by Kerry Conran. A fake pulp movie with giant robots, airplanes, Gwyneth Paltrow, and Angelina Jolie seemed appropriate for an evening where I did not want to thing much.

This movie, along Casshern, was one of the first to be shot entirely with a digital backlot, that is there were no real sets used for it whatsoever (the movie was shot in 2004). When watching Casshern, I regretted no seeing the blue-ray version, such was the quality of the picture. For Sky Captain and the World of Tomorrow, I had no such regrets, the movie emulates the pulp look and feel, with subdued colours and large flat areas. While it is fitting to the thema of the movie, blurry sepia tinted movies hardly requires a high-definition display.

The plot is what you could expect from such a movie, not terribly original, but perfectly passable and in the general tone of pulp stories, in the end, this was one of the aspects of the movie I had the least issues with. Historical consistency, of course, was completely absent, the movie starts with the Hindenburg III docking the empire state building in 1939, so Germany and the US seem to be at peace, yet everybody talks about World War I, even though there was no second. This did not really bother me, as I have since long lost any expectation of somebody related to hollywood having a clue about history, or reality in general.

My two main gripes were the rythme and the lead actors. I would have expected a pulp movie to have the same pace as the Indiana Jones movies, with maybe a few larger panoramic shots for the giant robots, flying platforms, rokets, etc, instead I got something that made metropolis feel fasts, with wooden acting. In one of the first scenes, the journalist is fleeing between the legs of giant robots while sky captain is fighting them using his airplane, I had more exciting trips to the supermarket.

The movie very much revolves around the two main characters: Sky Captain (Jude Law) and the journalist Polly Perkins (Gwyneth Paltrow), who are a bickering couple whose panters is supposed to pepper the movie. It does not work. Iron Man has proven that Gwyneth Paltrow can do the bickering couple pretty well, but Jude Low is not Robert Downey Junior, in fact he is so much the poster pilot that he is completely forgettable. I remember his airplane better than him. In fact the movie would in my opinion be better with Gwyneth Paltrow arguing with an airplane.

Another weak part of story were the antagonists, the mysterious assassin played by Bai Ling is robotically unexpressive, and the main bad guy is played by a dead actor: Laurence Olivier. Mysterious does not mean absent, one hand, a voice and white cat make perfectly functional vilains.

Given the fact that pretty much all acting in the movie seemed wooden, I suspect this is more related to the director than the actors. The only moments where the movie quickens a bit is when Angelica Jolie is on screen, both her character and her acting really stand out, and I felt that Commander Angelica Jolie and her british flying platform would also have been a better movie.

One of the lame gags of the movie is that the journalist character only has 2 shots left in her camera and cannot commit to take pictures of all the amazing stuff she sees. In a sense, this movie is just what she misses: a set of gorgeous scenes, with some plot woven into it, slowed down so that the visuals can shine; the result is a pretty boring movie.