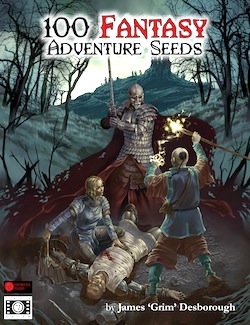 I could not stay in London without going to the Forbidden Planet shop. While I think the RPG shelf has seriously shrunk since the last time I went, I still found an interesting supplement: 100 Fantasy Adventures Seeds by James Grim Desborough. Meanwhile I realised it could also be bought in pdf format (with a different cover), still this is the kind of text I liked to have in a bound form.

The content can easily be guessed from from the title: each page contains a short scenario description, followed by three twists, an epilogue, and sometimes a few more notes. The scenarios in themselves are usually nothing special, and I could have though of most them by myself, but having them all together gives a very good source of inspiration. The idea of decoupling the core idea from the twists and the outcome is in my opinion very good, this helps clarify what is the narrative and what the characters can figure out during the game. As there a multiple twists per scenario, the game-master can even change his mind during the game, something I often do.

The setting used in the scenarios is fairly standard high fantasy, with a lots of magic and powerful gods, the back-cover contains the note: Warning: Mature Content, but there is not much to get excited about. I also suspect the author has something for undead creatures. References to non-human races (orcs and gnomes) are few, and thankfully there was nothing involving elves – for some reason scenarios that require elves tend to suck…

In conclusion, I found this an interesting read. If you are just after a few good ideas and don’t think of using this as a kind of reference, buying the online pdf would probably be a better option.