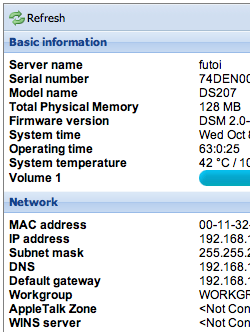 This week-end, I finally took the time to upgrade the firmware of my Synology DS-207 NAS to version DSM 2.0-0722. The upgrade was a little bit complicated: you first have to download the patch to Mac, prevent the Mac from expanding it, then upload the patch to the NAS by the way of a web-interface which does not work with Safari. The advantage when you don’t upgrade often is that you feel the difference: the whole web interface is way more polished and responsive thanks to some AJAX code, many services that kind of work are now stable (typically the iTunes music sharing service), and things that had to be hacked in are now installed by default (SSH access, NFS server). The Linux kernel is now Linux 2.6.15 #722 Fri Sep 19 20:30:34 CST 2008 ppc unknown. Finally the web interface is now better structured, and many components have their own interface. For instance the “Audio Station” can be used to see the various songs stored on the NAS, they can also be listened to using a flash player. Clearly Synology realized they can capitalize on their open-source foundation to build up the feature set of their product. They also seem to have shifted their focus from small businesses to private owners. The only thing I was missing was a SNMP interface, but I suspect I should be able to install NetSNMP one way or another.