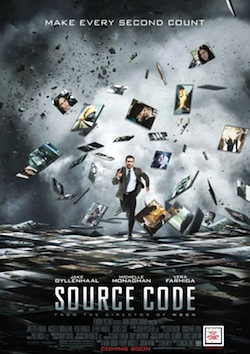 I was curious about the movie Source Code since I saw the posters for it on the side of busses in London, when I was there in March. Listening to the ever enlightening review by Mark Kermode I learnt the following things:

The movie could be described as the Inception version of Groundhog Day: a solider is living the same eight minutes again and again, trying to find who planted a bomb in a train. Besides trying various approaches to find the bomber, the hero, also tries to figure out what he is doing in that operation. While there are many explosions in the movie (technically always the same though), characters are the core of the movie: the hero, the girl sitting with him on the train, his commanding officer and the scientist supervising the programme.

The movie felt quick, efficient, interesting and packed a lot of things into 90 minutes. In the 100 minutes of Groundhog Day, the protagonist only has to seduce a girl. The last few minutes felt a bit like they were designed to start a conversation at the café afterwards, with hints on parallel universes and branching, but I certainly prefer movies that try to start conversations instead of placing products. In my opinion Source Code is a very good movie that I would recommend to anybody wanting to see an interesting thriller with some science-fiction elements.

One thought on “Source Code”