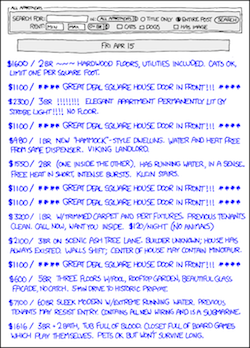 p class=”lettrine lang=”en”>I more or less finished reading House of Leaves. I write more or less because there are still annexes, footnotes I have not read yet, I’m not sure that I will read them. So what is House of leaves? From the wikipedia to the back cover, all snippets proclaim this is the début of Mark Z. Danielewski for me it was first the book XCKD was making fun of all the time, for all the typographic play that happens in the book, you would expect that somebody would figure out the correct accent for début…

The book has a complex structure, with three main stories, one in the main text flow, the second in the footnotes, the third in a sequence of letters in annex. The main text is the analysis of the The Navidson Record, a documentary about a strange house. The first level of footnotes (there are more) tells the story of Johnny Truant, who has recovered the manuscript of the above, and slowly sinks into madness. The letters are the ones Johnny’s mother sent him when he was a kid. Each narrative has a different layout, a different font.
Like Se una notte d’inverno un viaggiatore by Italo Calvino, this is a book about books, House of Leaves just has more of everything: pages, parallel narrations, footnotes, references typographic tricks and quirks. Readers familiar with Terry Pratchet’s Diskworld novels know that in those books, death speaks in capital letters, House of Leaves is full of this: each time the word house (or its equivalent in another language) appears in the text, it is slightly knocked off the line and in dark gray (other editions use different colours). The author plays with the various levels of a book: narration, translation, typography, layout. The text is choke full with codes: acrostic, morse, braille, but also references, quotes (including one from Woz) and analyses.

The core issue of the book is that by having clever bits all over the place, the actual story becomes dull and slow. By half of the book, I started to feel the tricks were a bit all in the same vein. I liked the various interviews though, and the part where Johnny writes with long s (ſ) characters made me chuckle.
While I got some of the hidden things, they were not subtle enough to be completely ignored. So while the back-cover claims that it is distressingly scary, I was never really involved enough to be scared, and comparing this book to the works of Poe is just plain silly. Fear is not a feeling you can associate with the act of checking cross-references. In conclusion, a interesting book and a fun intellectual exercice, but in my opinion the book is way too long and too wrapped up in its cleverness to be a really effective story.

One thought on “House of Leaves”