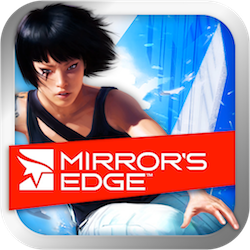 One PS3 game I was looking forward too was Mirror’s Edge: I liked the idea (first person platform game), the settings (a dystopian city) and the graphical style (very clear lines). With so many games going the way of darker is better, this was refreshing change. I bought the game, but alas, it was simply to hard for me. I had trouble finishing the tutorial, and investing the time to master the game is not something I’m willing to do. So I lent the game to a friend, and moved on.

Apple had a special app that linked to some different free content in the App Store every day for a 12 day period around new year. In many cases, the free content was not available in the swiss store, and I was too busy to muck around with store settings to get to the US store. But one worthy content was the iPhone version of Mirror’s Edge. The game is not first person, instead it is a more classical side scrolling platform game. The graphics are, of course, simpler, but the general style has been preserved, and I had fun playing a few levels. In conclusion, for the price I paid it, the iPhone game is really nice, although I don’t really feel like I ripped off Electronic Arts, given the price of the PS3 version. If I were Sony, I would really worry about apple, up until now, no PS3 game could match the fun/price ratio of iPhone games.