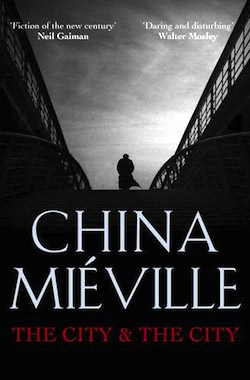 The second book I took on my last travel to the US was The City & the City by China Miéville. The book won the prestigious Hugo Award for 2010, was nominated for the Nebula, and even got a very positive review from my friend Alias on his blog. As I had really liked the previous books from the Perdido Street Station series, this seemed like a good use of my backpack space. I finished it in one go.

The book tells the story of inspector Tyador Borlú trying to solve a murder case, but the story is really about the two cities of Besźel and Ul Qoma which exist in the same place, but are separated by some social taboo. Of course, solving the murder case leads the inspector to unravel the mysteries of the two cities. Compared to previous books, the City & the city is way closer to classical literature: a murder case, a place between eastern Europe and the west-most part of Asia with characters from the US or Canada, the fantasy part is reduced to a thin sliver. In my opinion, this is what makes the book very powerful.

Rackhaus said something I ignored. As I turned, I saw past the edges of the estate to the end of GunterStrász, between the dirty brick buildings. Trash moved in the wind. It might be anywhere. An elderly woman was walking slowly away from me in a shambling sway. She turned her head and looked at me. I was struck by her motion, and I met her eyes. I wondered if she wanted to tell me something. In my glance I took in her clothes, her way of walking, of holding herself, and looking.
With a hard start, I realised that she was not on GunterStrász at all, and that I should not have seen her.

One weak point of previous books by Miéville was the characters, which I always had trouble empathising with. In this book, this was not an issue, maybe because his character building improved, but I suspect this is mostly related to type of story. When writing fantasy fiction, one expects flamboyant characters, in a murder case that starts in dirty suburbs, one expects a dogged cop, and this is exactly what we get. The cliché characters make the story flow, and do not distract the attention from the real center of the story: the cities.

As with previous books, the urban setting is brilliant, but here it is well anchored in the real world. The Kafka-crazy situation is introduced as the story progresses and feels natural. The way the city, its history and its germanic sounding language is slowly and artfully built up reminded me of Eco’s Foucault’s Pendulum. While the story feels very classical, the story had just the right amount of twists to make the story gripping. I also felt that behind the story about cities lurked some interesting insight on social distance as opposed to physical distance, stigmas and taboo. I found interesting that the duality that is omnipresent in the book is not build along the religious lines: christian versus muslim.

In conclusion, a extremely good book, that I heartily recommend reading.