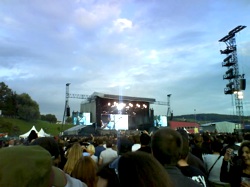 Who are those people? asked the two old ladies we sat with in the train. There are usually half a dozen people getting of the train in Wil. The train was packed with people, mostly wearing black T-shirts. The reason for this concentration of people was the Metallica concert at the Degenaupark, close to Wil. While I am no fan of Metallica, I was quite curious to see a real concert of the legendary band. The concert was outdoors, which changes the general setting, I think I prefer indoors concerts, at least for this kind of music, still the mood was nice and so was the weather, not a given in Switzerland. While many people knew all the songs by heart, I just recognized a few classics, and in some ways, was more used to covers (typically Apocalyptica ), or friends singing “master of puppets” in Karaoke. A really nice surprise was the first part by Within Temptation, which I really loved. All in all, a nice way of spending the night before leaving for Japan.

One thought on “Metallica”