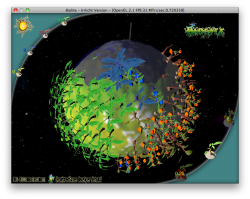 One event I never missed while living in Zürich is the Bünzli in Winterthur. This is the only demo-party in Switzerland, and always fun. This year was a little bit special, as it was the last time at this particular location, the Kirchgemeindehaus in Winterthur. As usual, the most awaited demos where the overhead project (OHP) ones, with lots of complicated moire effects, chemistry and flames. This year the most exciting thing for me was that Angel from Calodox released a game: Biolite. This is basically a rewrite of the 96K game released at the 2006 breakpoint, this time with nice 3D graphics. 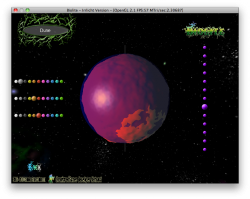 The game features a 3D planet where plants fight for dominance. The goal of the game is to expand on the surface of the planet, tree with many leafs collect the sun’s energy, while plants with fruits let you store it. Killing the opponent’s plant requires energy, and so does planting need seeds. The game also lets you customise the planet’s structure and appearance. The game uses the irrlicht library and runs on Windows, Mac OS X and Linux. The files for the released version can be downloaded from the bünzli site.