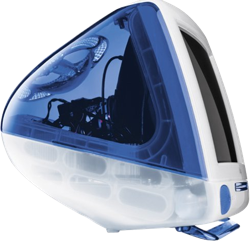 This week-end, I set up a new machine for my mother. I had bought her a new 20 inch iMac which repla­ced a 1999 blue iMac. I felt a little bit sad replacing a perfectly func­tional machine, but the proc­essing of complicated web pages and PDF files was really getting slow, not to mention the fact that I was getting nervous about the data in a nearly ten year old hard-drive. I also wanted a no hassle backup solution, which Mac OS 10.5 offers.

There is no way my mother’s computing activities are going to exploit the power of two 2Ghz cores, but there have been many improvements on machines within a decade which become obvious when you run the two machines side by side:

Screen quality
Compared to the old CRT, the quality of the glossy LCD screen is really striking. Colors are more intense and the text way more contrasted. I saw none of the picture quality problem which seem to have plague early 20 inch models.
Silence
The old iMac was producing a humming sound, the new machine is basically silent.
Boot time
While the old machine’s booted, you could go to the kitchen en prepare yourself some tea, the new machine is ready in a few seconds.
Space
The new machine is way more compact, despite having a much larger screen. The stand design and the new keyboard mean the machine does not use much space on the table.

One amusing side effect of me setting up this machine, is that my mother now has a more powerful machine than her two sons who both work in IT. In a sense I’m not sure this is really a desktop computer, it looks way more like an appliance from the outside and a laptop from the inside.