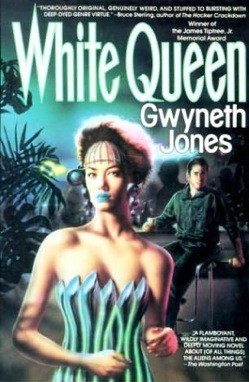 For my travels around California, I bought a few second-hand paperbacks. One of them was White Queen by Gwyneth Jones. I had read Divine Endurance a few years back, and I remembered it as a strange but interesting book. White Queen certainly fits that description well.

The world is a strange post cyberpunk setting, while present, high-tech stuff is not really in the foreground. The story starts in Africa with two journalists, one young man exiled from America and a sexy tabloid reporter. She is convinced that the aliens landed on earth, he is trying to clean up his name and seems to have something special the aliens want. The complicated relationship of those two will become entangled with the whereabouts of the aliens and the political changes their arrival triggers. The main thema of the book seems to be ambiguities and the non verbal communication, both between the sexes and between humans and aliens that are really different (a point I really like).

Some part of the style and the initial African setting reminded me of Chaga, by Ian Mc Donald, maybe the white queen inspired it (it predates it). I really like White Queen, has it had weird ideas a non-predictable plot and interesting relationships. I also like the writing style, which feels slightly british. A worthy read if you like strange science-fiction.