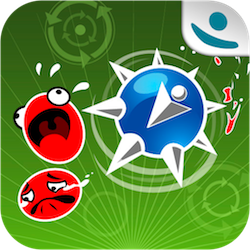 While it is easy to emphasize how much computer game graphics have improved since my youth, the real changes invariably come from the input methods. The first Videopak console I played on had delicate and slow joysticks. Most of the fun of the new games on the Commodore 64 came from the fact the joysticks where fast, and some games actively used the fact you could flip them back and forth fast. RTS Games only made sense because of the mouse all computers had by then, and the fighting games on the newer consoles where possible because of the multiple buttons and the ability to do combos. The Wii console, but also games like Guitar Hero took the input system of computer games to completely to a whole new dimension.

Tilt to Live is the re-invention of a very old game, basically Asteroids, for the iPhone. The key is it uses the tilt as the sole input. You can’t fire, this is determined by the specials you capture. The game is fast, very fluid, and tremendous fun. With a game taking generally less than two minutes, this is the kind of play I can indulge in easily. The graphics are simple, but smooth and elegant, the gameplay is excellent, and the loading screen even has a kind of humor I like. At 2.20CHF it is really a bargain.