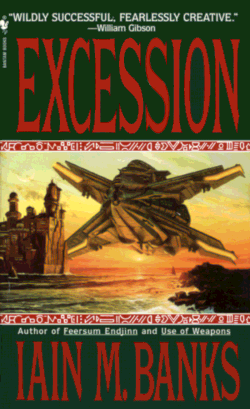 When leaving for a trip, I always forget stuff. As this seems unavoidable, I just concentrate on not forgetting the critical stuff and make do for the rest. The thing I forgot when I left for the United States was a book given to me by a friend. A Iain Banks book. Upon receiving it, I thought “That will be a nice read during the trip” and forgot to take it with me. This was kind of frustrating beside the fact that I had forgotten something, people kept on saying good things about Iain Banks, so I wanted to read one of his books. Luckily there is a nice used books store in Mountain View, so bought “Excession” for cheap and read it.

Excession is set in The Culture, a galatic environnement where technology is sufficiently advanced to have solved most material problems. The Culture is host to both human beings, extra-terrestrial creatures, but also drones and AI, in particular ships. The story thus resolve around humans and ship interacting with entities outside of “The Culture”. Excession in particular describes the conspiracies surrounding the appearance of an Outside Context Problem, an object which shows mysterious capacities beyond the technological capacities of the Culture.

Excession’s narrative is quite classical for science fiction, with many parallel stories running in parallel, each describing one protagonist, either a human or a AI ship. Par of the narrative is the exchange of messages between the sentient vessels. I found the story interesting and the writing quite good, although I must admit that I found the electronic format tiring (the fixed width font used in the book is horrible). In conclusion quite a good book, certainly not as ground-breaking as Adam Robert’s Stone, but a good classic.