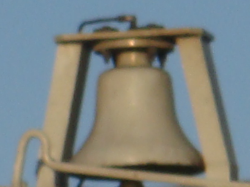 Regular of this blog might have noticed, I’m kind of a train fan. So it was with some curiosity that I took the Caltrain line that goes from Mountain View to San Francisco. I was somehow surprised by the low frequency of the trains: on Saturday, there is only one train per hour, and no express service. Still the train was quite full. The train is also far from fast, it took 95 minutes to do roughly 60 kilometers, so an average speed of less than 40 Km/h. While the train stopped at every station, the track is quite straight so it would be possible to go faster, but would probably involved straighter rails and electrical engines (the current trains are diesel engines): despite the low speed, the ride was quite bumpy.

One strange thing I had in the train going to San Francisco was a type of two level train I had never seen. Instead of having a single second deck, there were two second deck galleries, basically a mezzanine inside the wagon with a single seat on the window side. This is called a gallery car on wikipedia. The funny thing is that with this arrangement, you can see (and hear) people from the top deck from the lower one. The reason for this arrangement is that the wagon did not have a lowered chassis, so so the lower deck was still higher that the bogies of the train, this means there is not enough headroom for two full decks, instead, the space over the head of passengers in the lower deck. The other funny thing is that some locomotives have a visible bell.

If you put all this together, you really get the impression that the whole system is basically based on technology from the early eighties and was never really updated, quite a contrast for Silicon Valley. 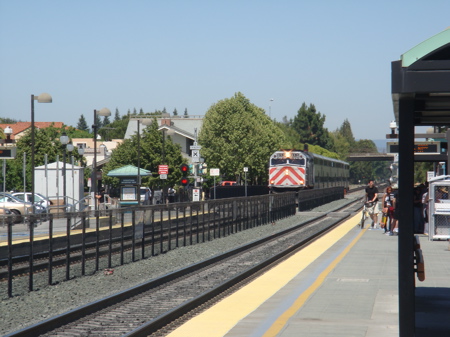