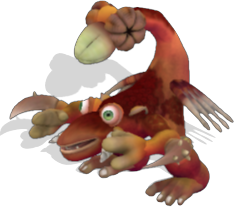 I’m not really a computer game freak, spending way enough time in front of a computer, but there was one game I had been waiting for some time now: Spore. I heard about this game from Angel more than an year ago, when we were discussing procedural generation of content for games, I have been following the game’s progress since. I watched my brother playing it this week-end and decided the game was indeed fun and bought it on the following Monday.

While I like RTS games, I’m more a builder than a fighter, and the whole concept of designing your own creature but also objects and cities is very appealing to me. The interface to change your creatures is very flexible, and you can design some quite weird critters, like the fellow on this page. The game style is also very flexible, you can play a pacific herbivore, an agressive carnivore, and anything in between. The inter­esting thing is that the way you design the creature affects the whole game-play. In the same way, the other creatures you interact with sometimes are other player’s creation. I had to set some graphical options to low to get a reasonable frame-rate, but the game runs nicely.

One thought on “Spore”