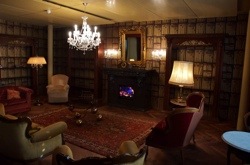 Roleplaying is one activity that is strongly asso­ciated in my mind with English. The first rule-books were in English, and while many games were eventually translated, this often took years, if it ever happened. Still I had always playing in French, with a heavy layer of English jargon with mangled pronun­ciations, which have become idiosyncrasies: DM became Déhemme.

Working in a company of geeks, many people are interested in gaming, with people playing in the library after TGIF. As my regular gaming group is undergoing a lull, I took the opportunity to host a small one-shot serenity game with some colleagues. The game went reasonably well, but this was very tiring. Mastering a game with new players takes some energy, and doing this in another language takes even more energy. Maybe doing a game of Serenity was in retrospect a bad idea, I kind of expected all the players to have seen the show, and that this would minimize the explanations, in the end only one guy at read it. Handling science-fiction with geeks is always a delicate thing, as the suspension of disbelief is larger, and thus requires even more energy. Still it was a fun experience.

One thought on “Roleplaying in English”