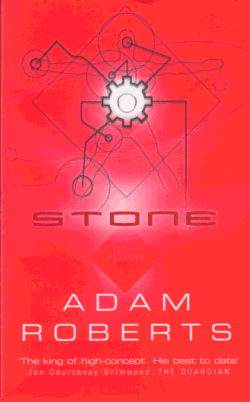 Stone is the third book by Adam Roberts that Antoine lent me. This time, the book is in the galactic empire utopia theme, with a utopian society from the far future with nano-technology, faster than light travel and no crime. As with polystom, the core issue of the book is exposed in the introduction, the only criminal from that society is freed from his prison to commit a mass murder on a planet. The book’s story center around this criminal’s story, how he tries to find out who would request such a crime while wandering around the galaxy.

In my opinion, the books has the same strengths and weaknesses than the others Adam Roberts books I have read so far. The plot is intriguing, and ripe with interesting ideas, and the general writing style rich, but the characters I still find flat. This is partly hidden in this book by the fact that the narration is centered on a the solipsistic protagonist, and the galatic utopia genre seems to be the realm of poor character development in general, but still, this weakens seriously the book.

I found Stone less imaginative than Polystom, but still there a quite a few interesting ideas. The authors deserves some credit for creating a galactic society that does not use either spaceships or teleportation for interstellar travel. In particular there are many interesting reflexions on quantum physics and how it relates (or does not) with our world. This is also telling a the general level, quantum physics is quite old, but is slowly reshaping many ideas, from the way the brain works to the science-fiction genre. I found very interesting some of the book’s ideas of the evolution of religious belief to integrate quantum physics elements.

One thought on “Stone”