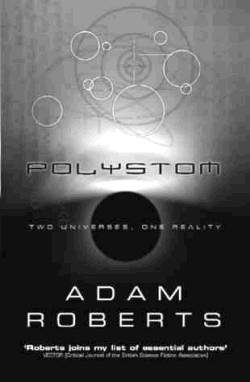 So I finished reading Polystom by Adam Roberts. It was a captivating and very interesting read. Polystom is very different from the previous book I read from Adam Roberts, Salt. When Salt could be roughly categorized as hard-science, Polystom is more difficult to describe. It could be to a greek tragedy, what steam punk is to victorian novels but deeper. The story does not simply use a setting where a technologically advanced civilisation with airplanes and computers emerged from the classical greek one, it is an whole universe based on the physics understanding of that time (no vacuum) and tries to follow the rules of greek tragedies.

That sounds like a very ambitious plan. Does the author succeed? Largely, yes. Let me start with the weaknesses. The greek inspiration is unequal, like the text, mixed up with latin elements, the would probably make purists squirm. Do I care? Not really, I actually love some of the whacky references, like Hermès bags which remind me of the style of Walter John Williams. The main issue is something about the writing style or the characters I already felt in Salt, the descriptions sometime feel distant, disconnected. This makes it difficult to identify directly with the protagonist of the story. Given the style, this is probably less of an issue in Polystom that it was in Salt. Does this make Polystom a bad book? No – I finished reading it in two days – it simply means it is only a good book, not a masterpiece, although I would say Robert Adams is going in the right direction.

Πολύ is the greek word for multiple and stom is the latin word for mouth. Many things are multiple in this book. There are two narratives, one for the protagonist, Polystom, and one for his uncle, the scientist, there are two stories one where the Polystom discovers the nature of the Mudworld, another, internal, where he confronts the ghost of his dead wife to figure out if she loved him. There are also two universes: the name of the Mudworld does not only refer to its swampy nature. Because the book tries follows so many rules in parallel, the outcome becomes actually difficult to foresee, which is in my book a very good thing. I also like the way the classical debate “What is reality” is skewed by the priorities of love and tragedy.

My conclusion would be that Polystom is a very good book, with a myriad of good ideas. I would recommend it to anybody who likes something a little bit edgy.