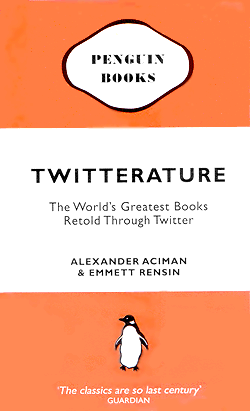 There are book you see in the book­store and think, “this is silly, I have to have it”. Twitter­ature is such a book. The idea behind the book is quite simple, rewrite some of western literature’s chef d’œuvre as a few text messages of 140 characters or less, using the conventions of twitter, resulting in less than two pages of text. While most of the book’s grandeur is lost in this zen process, you still get the core idea, the essence. The author did a nice job translating to the language of twitter messages (there is a glossary at the end of the book) and the self absorbed tone of tweets.

As with all books of this type, reading all of it in one go gets boring fast, but it makes a nice little book where you can read one master-piece per day…

Like many book characters, I’m pretty bored. Oh! A white rabbit! Just like in the Matrix. That movie was pretty dope, if you’re on drugs.