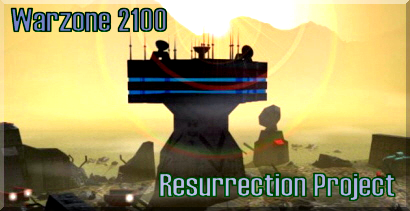 I always been a fan of RTS computer games, and had always been hoping that there would be some cool open-source project in this category. Most project I found until now I found not so good, Globulation is certainly innovative, but like often with open-source projects, the graphical art-work is not so good. Two other projects, Freecraft (now called Stratagus) and FreeCnC both were designed to re-use the graphical data from existing games, and both have been abandoned, so the situation looked pretty grim.

Warzone 2100 is a commercial game whose source-code and art-work have been open-sourced. The game itself is a very classical science-fiction RTS. While the game is certainly not in a stable state, it is still somehow playable (but save often). Better still, it has an active community, improving both the code and the artwork, which This is in my opinion important for the long term survival of the project. I think one reason this project is seeing progress where FreeCraft and FreeCnC did not is that Warzone 2100 uses 3D models instead of sprites to render the unit and buildings. Sprite drawing is a difficult art, and adding new sprites in the same style as the existing ones is very difficult. It is easier to incrementally improve 3D models. Also 3D based games can also better scale up to screen with higher resolutions. I usually plain Warzone 2100 1440×900, but the game was originally designed for a 800×600 resolution.