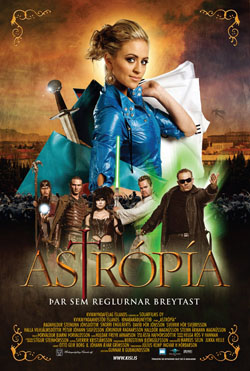 Some would claim that I’m doing a complete linguistic mashup with this blog, and they would probably be right. Astrópía is an Icelandic movie I watched with the original soundtrack and german subtitles, so it is only befitting that I review it in english. The tailer of the movie summarizes the movie quite well: a young blond superficial woman sees her world destroyed when her fiancé is arrested for cooking the books. She ends up in the street and has to live with her sister and find a job. In the end, she finds one at Astrópía, an RPG-comic-Anime shop. As she does not know anything about roleplaying games, she participates in a game organised by the shop owner.

Astrópía is an Icelandic movie (tag Þar sem reglurnar breytast) which happens in Island, played by Islandic people, including a lead actress named Ragnhildur Steinunn Jónsdóttir. The movie was produced with a small budget. While the scenario is not very original, I found the approach fresh and the visual style compelling. It mixes three approaches: a comic book aspect, a realistic style, and a fantasy style. The story glides from one style to the other. The movie contains this mix between reality and fiction I really love. In short a very nice film I recommend to any person with some geeky soul. It’s noteworthy that the german DVD contains the PDF files for three roleplaying games Cthulhu, Das Schwarze Auge (black eye, a D&D clone that is very popular in Germany), et Shadowrun, and small paper game..