I just received my second Airport Express Wireless Access Point. I must say I love those small boxes, they are reasonably inexpensive, and have a nice feature set. I wanted a second one to bridge my old laser printer and hook up the stereo in the guest room / office. So now I can basically stream music to most of my flat. The added advantage of having two access points is that I could reduce the emitting power and still get good coverage.

The resulting network end up being quite complex, with three network technologies (Ethernet, Wireless, Localtalk). Still it works nicely. The Localtalk segment is now really getting old, the technology has been abandonned in the nineties, but my trusty LaserJet 6MP simply won’t die, two of the platic rollers have liquified, but the things keeps on working. 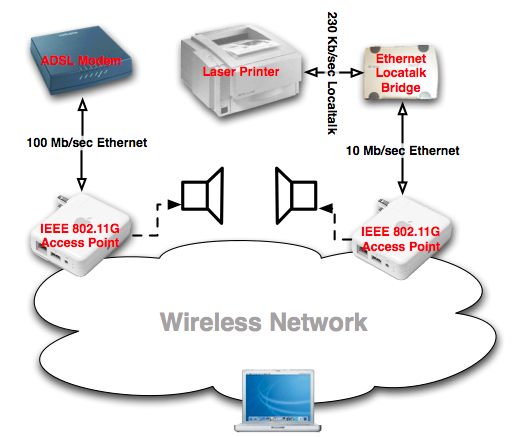