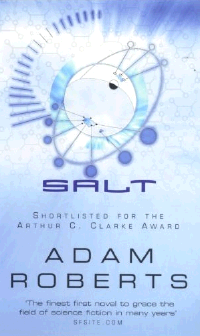 Recently I have finished reading Adam Robert‘s Salt. Salt is an interesting science-fiction novel describing the terraformation of a planet with to much salt. The story is told from two factions that diverge culturally and politicaly during the travel from earth planet, and end up in a war on the remote world. The story is told from three points of view, two leaders in the opposed factions and one observer lost in the war.

The book is ambitious, it tries to present a hard-science view of colonisation of remote worlds, presents characters from with different mentalities and seems to me to be a not so subtle parable about the middle-east situation. While the book is definitely not bad, and a nice read, neither is it, in my opinion, a masterpiece that fully reaches it goals.

The hard-science aspect seemed somehow flacky, in one paragraph, talk is about how scarce organic matter is, the next paragraph is a description of a night-scene with bonfires. The narration is basically composed of two monologues, two diaries. While the styles are very different, the lack of personality in both gave me the feeling both were political manifests more than reflections of real human beings. As a result, the divergence between the two people seems somehow artificial and contrieved, as if the story was pushed into an analogy instead of following its own natural course. The fact that the most precious elements of the planet, water, is actually not a direct or indirect cause of the war also seems very strange to me.

The book share one important element with Herbert’s Dune: a planet which is barely viable for humans and the most precious resource is water. Petja, the leader of one the factions, also goes away in the desert, driven out by the war, and comes back with some mystical insight. Still Salt is not Dune, it misses the energy, the grandeur of Dune.

All this said, at 250 pages, Salt is quite an interesting read with a few interesting ideas and if you ever played Sid Meier’s Alpha Centauri, a somehow familiar feeling.