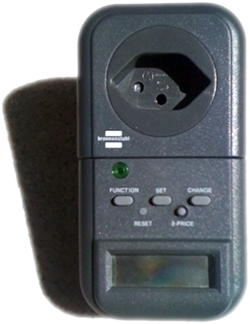 Recently I replaced a power-saving light bulb, with one of the newer LED based lightbulb. While there is some satisfying feeling doing the right thing, in particular when you actually did not spent any money to get the better lightbulb, my common sense was tingling. One of the classical mistakes of engineers is to optimize the wrong element. There is a perfectionist lurking in each of us, and he wants to fix things, even if this is not the best thing to do. Replacing a light bulb that consumes 12 Watt by one that does consume 4 Watts, only saves 8 Watts, and only if said lamp is burning, which, in my flat is not that often.

Common wisdom is that the devices in standby consume a lot of power. It’s true that there are many devices with blinking lights in my flat. But this time, I decided I wanted numbers. So I bought one of the cheap power meters and measured what the various appliances in my flat. Measurements are not very precise, but it gives a general idea of the situation. For each device, I turned it down as much as possible, if it had an economy mode, or simply an easily reachable off button, I used it. I only measure devices which have a power-cord, this excludes my fridge.

This gives a standby power consumption for my flat of around 125 Watts. This means a yearly power consumption of around 1100 kW/h. This means around 750 kW/h of high cost power 300 kW/h of low cost power (high-cost power in Zürich is between 06:00 and 22:00 Monday to Saturday, which basically means 5/7 of the time). The prices of EWZ are the following for the EWZ Naturpower (including 5% ecological power): Day tarif is 0.1850 CHF for a kWh, and night-tarif is 0.0950. This means standby costs me in total 175 CHF per year.

On one hand this is a lot, my total power consumption for 2008 was 1685 kW/h, so this would represent around 64% of my total power consumption. On the other hand, I just bought a selective power-strip to have the devices connected to my TV switched off and this has cost around 60 CHF so there is clearly a cut of point between power saving devices and the price of power. I’m hoping to basically cut off around 40 Watts of standby with this power stip by having all devices attached to my TV screen to be slaved to it, the saving should pay of the strip in roughly one year, but my main motivation is to lower the heating those devices provide. In summer getting 40 Watt of heating off is a first step to a cool flat. Devices like the printer can off course simply be turned off.

What this exercice confirmed that the actual consumption of devices is not very intuitive. I was quite surprised to discover that my bread-making machine consumes 15 Watt when doing nothing. I cannot even call this standby mode, as it does exactly nothing, no blinking lights, no listening for an infrared signal from a remote control, nothing. This basically means my bread making machine consumes as much doing nothing as my yogourt machine doing yogourt and much more than my LED illuminated kettle.

It is difficult to find any correlation between what device consumes a lot and which ones do not. My Apple airport express access point seem to consume no measurable power, the Mac mini consumes 9 Watts when turned off, with two additional Watts for the connected iSight. The only correlation I saw is that older devices (my Pioneer Hifi and the Aiwa VHS player) tend to consume more. I also have the feeling that Power saving consumption considerations are way less common on kitchen-ware that on high-tech devices. Besides the break-making machine, my Tefal Rice Cooker basically had two modes: cooking or warming, there is no off switch, you had to pull out the plug. This way easy to fix with a switch, but still this should be included in the device by default.

I was wondering if the fact that I now produce some food myself (yogourt and bread) myself had any impact on my energy consumption, but whatever that consumption of the machines I use to do stuff, it is overshadowed by the consumption of machines that do nothing…

I realized that the Sony TV screen switches to another mode after some time, where it consumes very little power. So the number on this page are off by 7 Watts.

One thought on “Power Slumber”