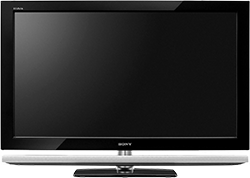 One of the things that I had some trouble explaining to people in the US was the fact that I had neither car or TV. I finally have one, or more precisely an LCD screen that holds a tuner. I was getting fed up in watching DVDs on my laptop’s screen, and some of my guest would probably have like to be able to watch some television.

After some looking around, I had decided to buy a Sony Bravia, my brother has one, and I really like the colors. My first though was to buy the plain 50Hz model, but Sony has a cash-back program on the 200Hz models, making the Z4500 fall into my budget. So I ended up waiting for a taxi to carry that monster home while fending off Cablecom idiots salespeople who could not understand that I do not want digital TV. It is kind of weird having the shop sales-guy help you avoid the sales people of cable companies.

The laser printer I bought last year was also under one of those cash-back programs. Basically, when you fill in the registration forms, the manufacturer send you back some cash. While this ensures that people fill in the registration forms, this seems quite complicated to me, as this adds transactions and processing costs. I wonder if this is also an accounting trick. The inventory owned by the shops is higher, and the manufacturer gets some cheap credit. As the offer is time limited, this could also ensures that the products are sold within a given time-frame (the cash back is limited in time).

To come back to the TV, it is basically a black slab with a one meter diagonal. It has a many connectors: three HDMI, two SCART, one VGA, one one S-Video, one USB, one optical out, and one Ethernet. There is also a PC-Card slot for decoder cards. It is basically, a big LCD monitor with a small computer attached. You know that you are in the twenty-first century when you have to set-up the IP address of you TV set. My local network has ten addresses in use only with the various devices I have. The interface is the same as most newer Sony devices, what they call the crossbar, I’m not convinced that this is optimal, but it is usable and has the advantage of being know even by me.

My plan was to connect my mac mini to it and use it as a media center using a DVI to HDMI connector. This worked out of the box, the only setting I had to do play with was the width of the video signal. By default OS X sends data in overscan mode to the screen, and the screen was trying to zoom into the picture, resulting in cut of top and side of the screen. But this was simply a configuration in the screen. I had to use HDMI port 2, as it is the only one with an auxiliary audio port. It would really be nice if there a way to have the computer’s sound output go directly into the HDMI cable, but well. Using a wireless keyboard, the computer is still usable as such. For DVD playing the Apple remote control is sufficient.

I also ended up rewiring my stereo installation: previously the auxiliary input of the my stereo was connected to my Airport express access point, now I wanted to be able to play the screen’s sound on the stereo. The solution I found was the following, I connected the TV to the stereo, and the airport express’s output to one spare audio input of the TV (the S-Video one). I still have to figure out if I can play the sound of that input in picture frame mode.

Being a computer, the screen is also able to display pictures on the USB mass storage device. It can also store one picture in its memory buffer and simply display that one. The result is an expensive picture frame, but I must say the colors are gorgeous. Another esoteric feature is DLNA playback for music and pictures. Basically this means that the screen can connect to a server and download JPEG and MP3 files and play them back. Of course hardware manufacturer could not just use HTTP, they had to devise a weird variant of UPnP to do this. It comes as no surprise that a mutant of a network protocol designed by Microsoft does not work that well. My NAS supports UPnP but is not yet certified for DNLA. I tried running a DNLA server on my laptop, with no success. Still has the computing power of the screen seems insufficient to play back movie files, this would be a nice feature, but limited to either audio files or pictures. We will see how things work with the next firmware version of the NAS.

What about watching TV programmes? I really felt like Crocodile Dundee: I turned the set on, saw a movie I had seen ten years ago, and turned it off.