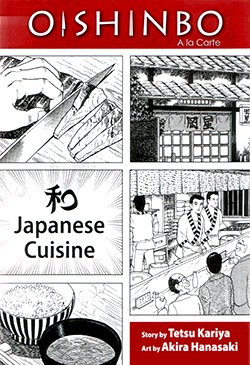 I read the manga “Oishinbo” by Tetsu Kariya. It is very interesting and now I want to eat Japanese cuisine.

One of the interesting aspects of manga is that japanese comic is not restricted to some type of story. For all intent and purposes, Oishinbo is a small essay on japanese cooking and the underlying philosophy. The relationship between the quality of the ingredients and the cooking technique, the question if just cutting raw fish can actually be called cooking and the zen foundation of the tea ceremony are all explored. Even the book’s plot is extremely classic: the feud between a father and his son gives raise to a set of cooking competitions, where both try to prove that the other does not understand the true nature of japanese cuisine.

One advantage of having this story expressed as a comic book is that drawing support the various theories and illustrates dishes and ingredients. In my opinion, plain text is not suited for expressing the sensual nature of good food. Still I would not say this is an easy read, I did not read the whole book in one go, but ended thinking some time about some of theories in book. In the end, this is a book a recommend to anyone interested in Japanese cooking.