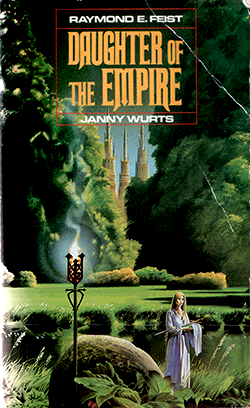 The way I read books can be quite random, some are finished a few days after I bought them, others can wait for years on my shelves. Daughter of the Empire, written by Raymond E. Feist and Janny Wurts must probably be one of the books that stayed the longest in my shelves and boxes, unread. The book, and the the following ones in the cycle where given to me while I still lived in Lausanne, by a friend leaving for Japan after his PhD.

Daughter of the Empire could be defined as crypto-japanese fantasy: an fantasy empire where clans play a complex game of intrigue and murderous politics. In this world, society rules are strict and complicated. Still this is not Japan, the authors went to great length to invente some exotic world, with a lot of japanese sounding words for plants, animals and rules. The result is very strange for somebody who lived in Japan, this fantasy is in many aspects less exotic than the country it seems based on. I’m not a fan of books who define new words for plants or adds creatures of burden with six legs just for the sake of fantasy.

The plot is very classical, the last daughter of an old but weak clan ends up in power, as her brother and father are killed in battle, she takes over the clan and tries to assure its survival. Nothing ground breaking, but a good read in the airplane nonetheless. The writing reminded me of Marion Zimmer Bradley, but in my opinion it is more readable, as the story spends less time on self-pity so I tended to identify with the main character, instead of wanting to slap her. I also found the descriptions somehow heavy handed, but this seems typical of this kind of fantasy the actual writing style and thinking process is very american, so a lot descriptions are added in to try to hide this.
In conclusion Daughter of the Empire was good read for the airplane, and definitely something worth considering for people who like classical fantasy – I will probably read the next volumes of the cycle – but this is nothing ground breaking.

One thought on “Daughter of the Empire”