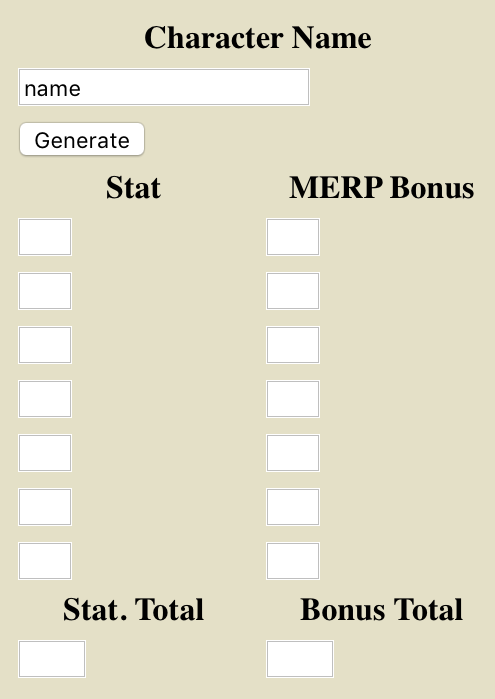 A new city means a new role-playing group. So it seems I will be mastering a new MERP game. Which means new characters. MERP is one of those games that require dice rolls for the statistics of the characters, so you can’t let the player just do the characters independently, which I’d rather.

So I started thinking, how can I build a system so that the player somehow roll dices in a way so that I can check the values they claim. The solution also forces them to think of the name of the character and try to come up with something original. The trick is to generate the stats from a hash of the name. The “rolls” are not really random, but they are unpredictible and finding the name which gives perfect stats implies cracking the hash algorithm.

With this idea, I created a small page that generates seven values between 20 and 100 from a character’s name. The interesting feature is that if a given name gives bad values, changing it a little bit, or making it longer will give different values. So by tweaking the name, you can make multiple rolls. For instance “Galadriel the Fair” gives better stats than plain “Galadriel”.

The SHA1 hash algorithm was taken from Paj’s home.

Edit: I made a newer version that calculates the total and the bonuses for MERP.