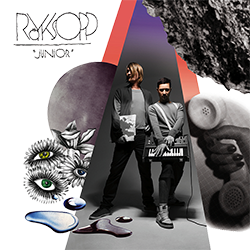 I bought the album Junior from Röksopp. The music is great and you can hear the voices of female singers I love.

I had been thinking for some time that the female voice in the Knife sounded a lot like the one in Röksopp’s What else is out there. I had the same feeling listening to Tricky Tricky, Wikipedia confirmed this feeling, in all cases, this is Karin Dreijer Andersson. What I discovered is that there is another familiar voice in this new album, namely Anneli Drecker of Bel Canto fame. She also did Sparks on the album Melody A.M., but there, she sings in a style quite different from the one in Bel Canto, so it is in my opinion, more difficult to recognize.

To come back to Junior, I really like the video clip Happy Up Here with its light bulb space invaders. Röyksopp really has a knack to have very graphically interesting video-clips, I certainly think that the one of You Remind Me is ground-breaking. I would probably have bought the album just for Happy up here. This was actually not the case, all the tracks are good, and Röyksopp Forever is just magnificent. The first time I listened to it, it had the same effect on me than Bedřich Smetana’s Moldau. So this is an album that I really recommend.