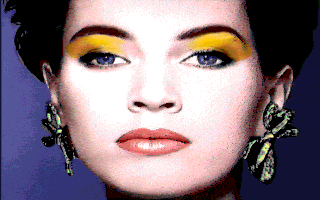 I recently discovered the Diskmaster web-site, which provides an interface to look for old media files, the files themselves are pulled from the Internet Archive. While the interface is very old school (we are talking Netscape Gray backgrounds), it provides a mean to look for old IFF/ILBM files. So I downloaded a few files to see if my Javascript visualisation library still works. All the images below are rendered from the original IFF files from last century.

The first file is millenium_front.ham. As the name indicates, this is a front-view of the Millenium Falcon in HAM format. This file was part of a disk bundled with the 96 edition of the Amiga Plus magazine. What is cool, is that the library found the following version string: Written by ASDG’s Art Department Professional IFF3.0.4 (31.03.95) embedded within the file. So we are decoding a file from 27 years ago.

The second file girl pic is, indeed, a picture of a girl, and was part of the tutorial for some morphing software, TSMorph. Here again, the library found some annotation, but it is not really useful: Written by HamLab Plus 2.0.8. As the picture is a 4 bit deep grayscale image, I doubt HAM encoding was really needed. From the pattern of the picture, I would say it was digitised from a newspaper. This picture was a good test because 4 bit grayscale is not a typical Amiga depth, more a Macintosh page layout thing.

The next file has most certainly bogus meta-data: I highly doubt that Darkside.iff by Jogi, was created on the 27th of February 1980, as the Amiga computer came into existence, and no computer of the early 80s could handle a 640 × 480 bitmap. This is typical of the demo graphics from the early 90s, I would say.

The following image is one I remember, Color-Lady was probably used in some advertisement. And with that kind of makeup, I’m pretty confident this image is from the 80s. Thanks to HAM (Hold and Modify) it has a large numbers of colours.

Finally, Welter 04 is a pretty nice spaceship / science-fiction scene, I would say this is not some digitised photograph, but a hand-crafted pixmap. This one uses a fixed, 8 bit palette.