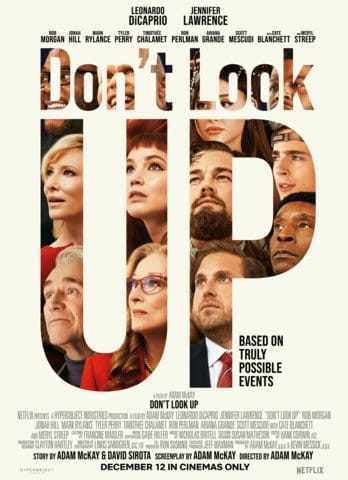 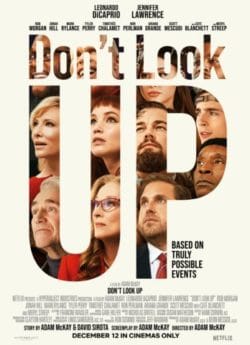 So we watched Don’t Look up on Netflix. The plot can be guessed from the opening sequence: a new comet is discovered, it is on a trajectory to hit earth, and the none of the two main characters are Bruce Willis. So we follow a nervous professor and a PhD student trying to convince the world of the problem.

The comet is large enough to destroy the earth, the trajectory is easy to verify, but the US government is unwilling to act, the media not interested in such a blunt story. As politics unfurl, people are told to not look up, so as to not see the increasingly visible celestial object. Besides the politics, the tech sector gets involved, which does not help…

Of course, the whole movie is a pretty blunt metaphor about the politics of global climate change. Maybe because of that, the movie somehow reminded me of Wag the Dog, which talked about a contemporary political issue. But Don’t look Up gave me a much stronger sense of unease, the vocabulary, the discourse used to discard the problem, or to try to somehow solve it using high tech technology was way too close for confort. The US president was really reminiscent of Iron Sky.

Unsurprisingly, the movie was criticised by the US media as being condescending and having artistic issues, whatever that means. Then again, they are not exactly shown in a good light. I found the main actors believable, Jennifer Lawrence as the PhD student who discovered the comet and Leonardo DiCaprio as the astronomy professor. The conversations the characters are involved in, the denial, the deflection people use when face with scientific facts certainly echoed what I have experienced.

I found this a very good movie, and would encourage people to watch it. That said, I don’t expect many people to change their mind over it, they will probably either go yup, that’s it, or hate it.