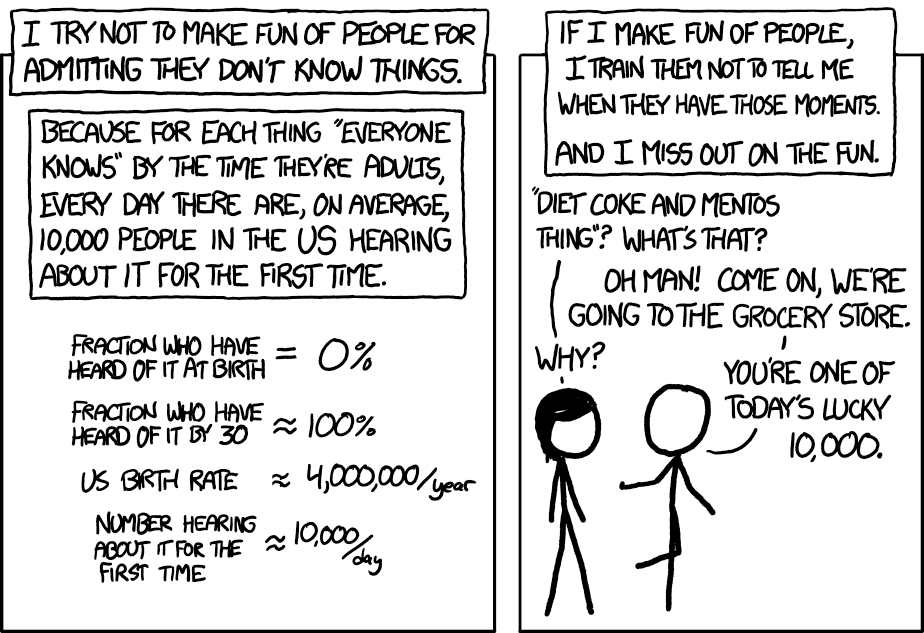 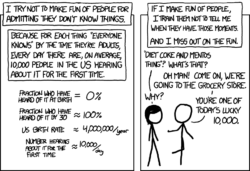 Balise wrote a very good blog entry about saying I don’t know which resonated with me, there is something joyful in being a beginner, but also that things like languages can only be known if they are normative and dead.

A related thing for me is the idea of delaying opinion. We are trained to have opinions about stuff – it’s an important aspect of the french dissertation, and exercise I hated. Saying I don’t have an opinion bear a similar stigma to saying I don’t know, with similar social stigma associated to doing so.

You can communicate both facts and opinions, and people often mix them up, but they are very different. Knowing facts helps you understand new facts, so does knowing opinions, but having an opinion tends to prevent you from acquiring new opinions, and discard facts.

The thing is, you only need opinions when you are going to act upon them. You only need to judge if brand A is better than brand B when you are going to purchase a product both build. Until that point, having an opinion has no value. The same goes for judging people. Sometimes you need to make a decision, because they are passing an exam, or you are hiring them, but most of the time, you don’t need too.

Maybe they are a terrible person, maybe they had a shitty day, until you need to take a decision about them, they can be in undefined state where they are potentially both. The same goes for defining oneself, a good chunk of my life was people trying to define me as either swiss-german or swiss-french, which as far as I’m concerned made as much sense as deciding if a thing is a particle or a wave. Collapsing your perceptions or one or the other is just not that useful.

The other thing you can do with opinions is influence people. Truth is, in retrospect, this never really worked for me. I certainly have influence people with acts, my enthusiasm, and with ideas but the best ideas are devoid of jugement, i.e. people are free to use these to reach their own conclusions. Generally, I find that conversation is most constructive for me when ideas and visions have not yet collapsed into opinions.

This does not mean that other cannot influence people with opinions, I’m just not very good at it…