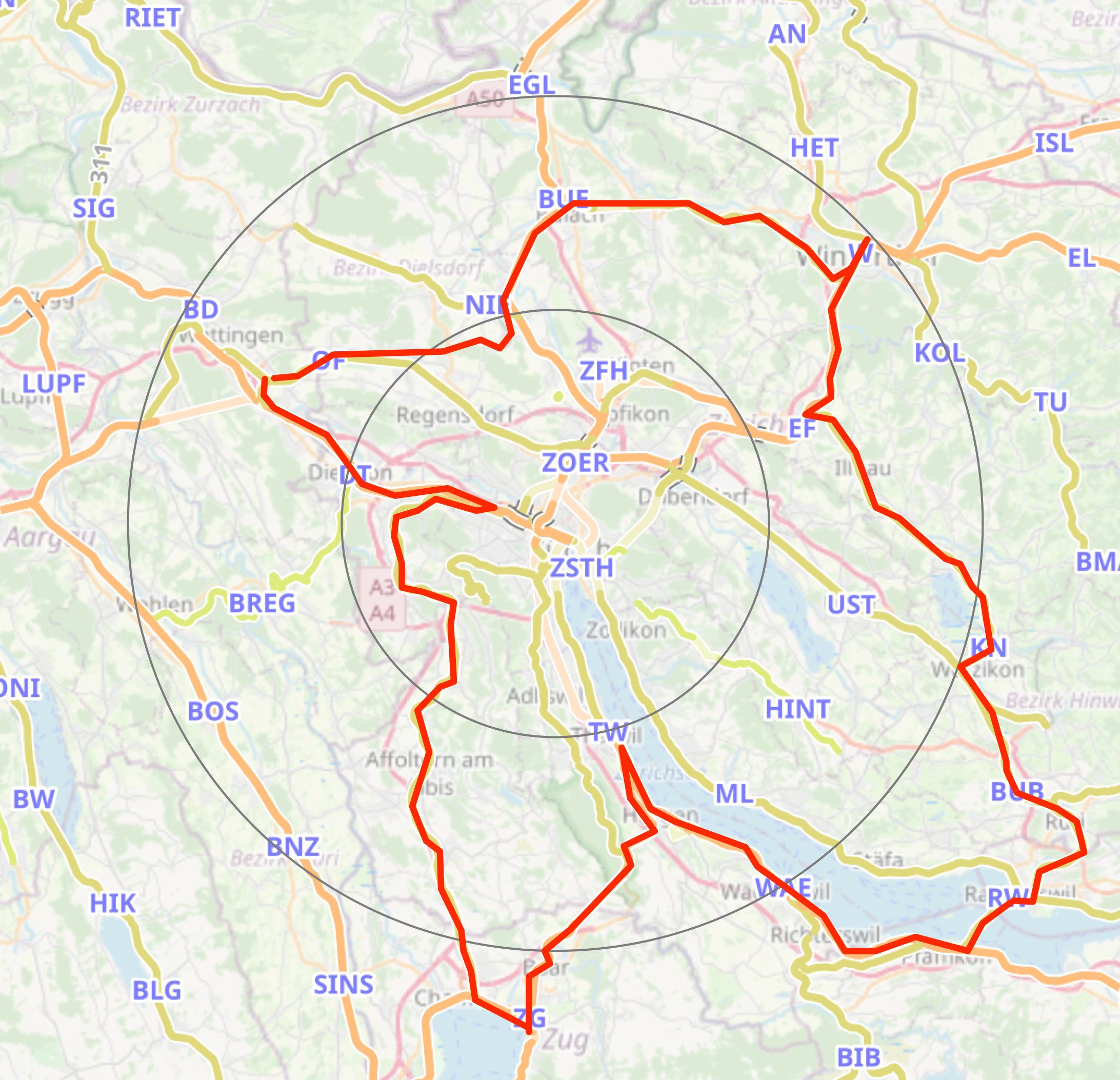 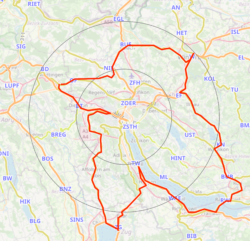 The Pedestrian Observations blog has an interesting entry about suburban circles, basically circular rail lines in the outer radius of a city.

I found the exercice interesting and started wondering if it would be possible to have a circular line around Zürich, with a radius between 10 and 20 km. The Pedestrian Observations blog entry talks about New York and a radius between 20 and 25km, given the local scale, this feels big.

Interestingly, such a circle would be kind of possible with minimal changes, it is by far not a perfect circle, as geography forces it to extend to 25km to avoid the Zürich lake and the Albis mountain range. Most of the track exists, or at least existed.

Starting from Bülach (BUE) the line would go to Winterthur (W) on the old line between Winterthur and Basel, now used by the S-41, there it would change directions to go towards Effretikon (EF), there it would reverse course again and head towards Kempten (KN) and Wetzikon, using the track of the S-3.

From there, the line goes to Rapperswil (RW), and crosses the Zürich lake. It follows the South shore of the lake until Thalwil (TW), where it changes direction and goes out to Zug (ZG) and takes the line north through the Säuliamt to Zürich Altstetten.

There it changes directions again, goes to Dietlikon (DT) to Killwangen-Spreitenbach, and from there to Otelfingen (OT). From here, the line would take tracks which have been abandoned, the so-called Schipkapass Bahn, which used to connect Bülach to Otelfingen. The track is only missing between Buchs and the refinery in Obserhasli.

While such a line would be possible, it would certainly have serious drawbacks. The Buchs – Obserhasli section would need to be reconstructed, possibly with gentler slopes. Besides this, the line would change directions a lot: Winterthur, Effretikon, Thalwil, Zürich Altstetten and Bülach. Changing the tracks to avoid such direction changes would be complex, as often the tracks have significant slopes.

Would such a line make any sense? Probably not, most of the segments have passenger traffic because they connect to the center of Zürich.

Map based on the OpenRailway Map.