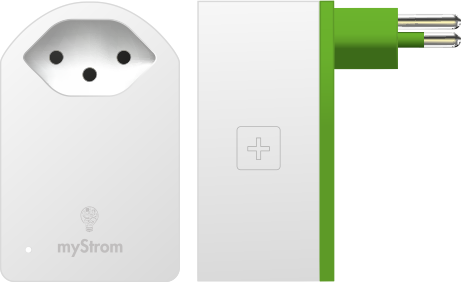 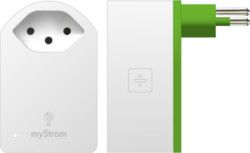 It has been nearly two months since I wrote about my MyStrom adapters – I tried various things out in the meantime.

I bought two more of theses switches, and bought some second-hand powerlan adapters, also from MyStrom. This ended up being a total waste of time, the stuff I got sold on Ricardo was crap, some of the adapters did not work, others I could not control because they were registered to another user, which was different from the seller, it seems. When I complained, the seller sent (at my expenses) more broken devices, so I have more stuff to dump into the e-tram. The system has three types of adapters:

From the seven devices I got (four in the original order, three replacements), only two of them work fully: the red one and a white one. One of the blue one worked – but as I was missing the code, I could only use the network link, and have a power switch controlled by some random dude on the internet – still I learnt a lot about these devices trying to make them work, which clearly use the same chipset as the ones from AWM Fritz: my Fritzbox was able to control the control lights and the pairing. There is something absurd in being able to control the control LEDs of a power switch, but not the switch itself…

Even the working device had another issue: they are huge and completely block the power connector, this is particularly bad for wall sockets with multiple plugs, or an adjacent switch.

The other thing I was looking at was HomeBridge, I had managed to control the switches by the way of my laptop, but this was not very useful as I want the system to work when my laptop is off. I tried building the package for my NAS, but I ran into build/deployment problems, the system requires some multicast DNS infrastructure, and this something that is not fully standardised between the various Linuxes, and I always run into problems with this on my Synology NAS.

I finally got it to run on a raspberry Pi, which is cool, except by then MyStrom had added direct Homekit support to the newer switches, and the HomeBridge package for MyStrom did not support the old ones – it looks like a simple fix, but I don’t want to run a service for a single switch that uses a full plug.

I found these switches really useful for turning on and off the various appliances that connect to my laptop on my work desk: dock, screen, etc. having a Siri voice command instead of crawling under the table to turn it on and off is nice.

The other switches ended up being on light switch duty – now that we have a baby, being able to turn lights on and off remotely with one hand is actually quite handy. I would also like to automate things a bit more – currently MyStrom is quite limited, you can set the state of the switch from automation systems like HomeKit or IFTT, but you cannot read it. I also need some lights that can be dimmed a lot, the Phillips Hue white lightbulb was promising but is still too bright.