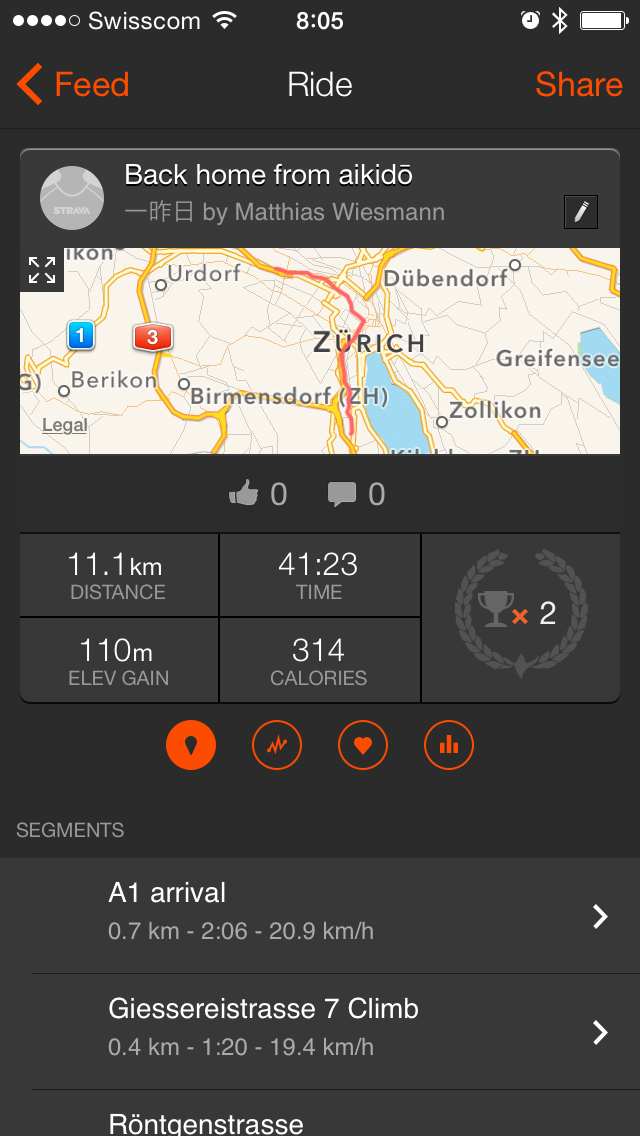 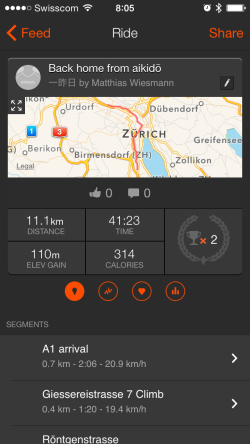 When I was a kid, I remember my father buying some distance measuring counters to mount on our bikes. A pin fixed to one of the spoke would increment a mechanical counter. Of course these did not survive long. Keeping track of my biking has always been a goal for me, but I was always frustrated by the complexity: I had a bike mount for my old Garmin GPS, but getting the data to the computer was horribly complex, I needed a serial port to USB adapter and the software for OS X was non-existent.

Things improved with the advent of smartphones and I started using Runkeeper. The program was always plagued by issues, power consumption and crashes. Things go worse recently, when crashed became systematic, and at the same time the level of nagging for premium access became obnoxious, it was time to look for another app.

A colleague had spoken about Strava so I gave it a go and I have used the iOS app for a few weeks now. I found the interface much more polished and intuitive for the basic stuff (starting and stopping a ride) and it crashes and nags way less than Runkeeper, so this is definitely an improvement.

Generally Strava seems to be more focused on biking and running: you can specify which bike you used, and rides are cut into segments which seem to be algorithmically constructed. You can see on the web interface how you compare with other bikers (there is another Matthias W. going twice my speed on some) and more importantly relative to past rides. I find this feature nice, but just wish there was an easy way to fix their name (one of them has a localization bug / typo).

My main issue with Strava is the Healthkit integration, while it exists, it is extremely buggy: the data for each ride keeps disappearing and only re-appears when I look at the given ride in the iPhone app. I also wish there would be an easy way to automatically match give rides (typically my commute to work and the aikidō dōjō) with certain routes and name and tag them accordingly.

I really hope that the Healthkit bug gets fixed because except for it, this is really a great app.

One thought on “Strava”