During my flight back from Switzerland to Japan, I have read 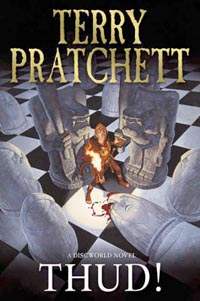 I have been reading DiscWorld stories for some years, starting with Rincewind’s adventures. The style has evolved quite a lot, and Ank Morpork’s watch has taken more and more importance. The stories have become more rich, with some political elements and mystery solving. Each novel developing some aspect of the world: regions of the world, or the different races that haunt any fantasy world.

Thud is continues in trend and features a murder investigation with in background riots between troll and dwarves. The story is a nice read and kept me hooked during the flight. The humor is still there and I chuckled more than once. The only weak point of this book is the end. Terry Pratchet tends to build his stories by piling up more and more elements on the plot, but has often trouble to build a satisfactory end. Because of this story ends tend to involve a lot of strange super-natural entities, once this entity is defeated the plot collapses and everybody rejoices. Thud is no exception, although in my opinion, the whole story would work well without such a deus ex machina.

Despite the weak ending a really liked Thud which definitely makes a good read.