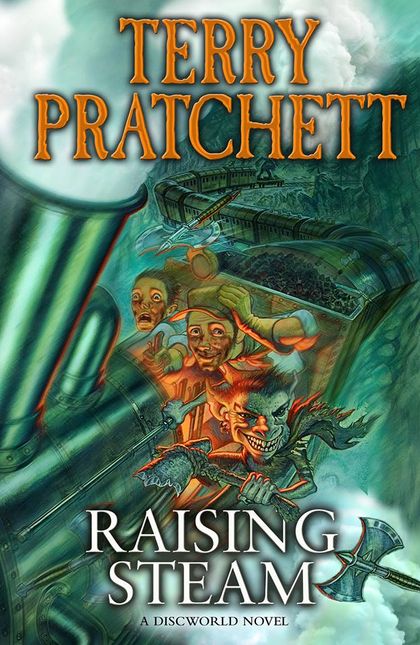 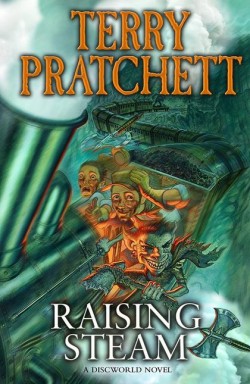 I used to think of Perdido Street Station as Steampunk version of Terry Pratchet’s universe, but along the Diskworld® novels, the world has undergone its own industrial revolution. After a light based telegraph system (the clacks) Raising Steam tells the story of the appearance of trains.

It is easy to make parallels with the Going Postal which got its own movie: same main character (Moist von Lipwig) and same background theme (a new technology emerging), the problem is, Going Postal had original ideas: the clacks are not just a simple telegraph, the community associated with them was inspired by programmers, not Victorian telegraph operators, and most of the involved characters were new.

There is no such originality in Raising Steam, the central character is again Most von Lipwig, but nearly every Discworld® characters pops up in the story. The engineer behind the steam engine, Simnel, is a very straight engineer, except when he could be trapped, then he reveals himself to be smart about the world. The steam engine is just that, a regular steam engine, no variation, same thing about the people in the railway: they come out straight of the Victorian book of clichés.

The book could be divided into two parts, the first one is just a description of the building up of the railway, it is well written and pleasing to read, but there is no real suspense because there is basically no antagonist. The second part is basically some simple conspiracy plot which seems to have been bolted on the previous dissertation to make it look like there is an actual story. This part could also be called the Parade of Mary Sues, all of Pratchet’s main characters are on a train a beating the shit of the weak opposition, even the crook reveals himself to be a tough fighter. Of course, there is not much tension as the opposition seems to be, at best, an afterthought.

The second part also contains a set of sudden reveals, but they concern secondary characters and feel very artificial, so does the final deus machina moment. In general I felt that by pushing all the interesting characters from previous books into this story, it watered them down or changed them in contradictory fashion.

One annoying pattern in science fiction and fantasy books is that as the authors get older, they often try to make all the bits and pieces of their work fit together, this seems to be motivated more by a will to make their life’s work a coherent piece, not to write a good story. Raising Steam clearly falls into that category of books.

Terry Pratchet often had trouble with his book’s endings, but this is the first time I really though come-on while reading the last part. So while the writing style is still as enjoyable, and I really liked the first part, I can’t really recommend this book, which is basically a pale shadow of Going Postal.