The building I live in was probably built around the late sixties, the ground in the basement is just some gravel, with some structure to store potatoes, and there is a space under the roof to hang laundry. This also means that the phone installation is not exactly top-notch. Maybe because of that, I always had trouble with my internet connection, it would work well for some time, and then I would get more and more disconnections. In the end I would call the support from Swisscom.

They would ask the usual set of useless questions, trying to put the blame on my wi-fi or something, and would send a technician to my place, the guy of course would typically come sometimes between 9 and 12 in the morning. Of course, working from home when the internet connection is falling down all the time is not really an option, but Swisscom’s mentality is still shaped by the idea that each and every household has a housewife ready to welcome their technicians. 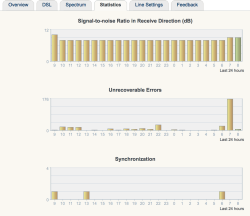 The technicians would do measurements, and be generally baffled, typically the problems occurs early in the morning or late in the evening, I suspect when many people use the internet and the rate of interference is high, of course, this is exactly not the time when the technicians do measurements.

You would think that Swisscom would somehow monitor their lines, but they don’t seem to do this, makes sense, if they acknowledged that their line is crapping out most of the time, the question of a refund who pop-up, inconceivable. Sometimes a technician would look at past logs and say something like wow you had a lot of disconnects. Eventually by replacing my router and futzing the line parameters, the connection would work again for a few months.

A few weeks ago, the circus started again and the technician solved the problem by changing the router, the line worked for a few weeks, and then the problems started again. The last technician who came mumbled stuff about billing me, so it seems that besides wasting my time, Swisscom wants to start billing me for this… Geeks around me often told me that the routers Swisscom bundles are crap, the Netopia I had certainly had a confusing interface.

So I had the choice between contacting Swisscom, wait for a Technician to come, loose half a day waiting for him to solve the problem by exchanging my router with an exact copy which would certainly exhibit the same problem, or buy a router myself. As I’m quite busy these days, and fed up with the Swisscom’s service. I opted for the later.

I decided to buy a Fritzbox 3490. Fritzboxes have very good reviews and are interesting devices, that incorporate many functionalities into the router, in this case it can act as a NAS and a DEC phone adapter. More importantly, the interface lets me monitor and adjust my DSL parameters, so I could make Swisscom’s bad phone line do its job.

I had to configure the settings to not try to get the maximum performance, but I now have a stable line. I have yet to fully use all the features of the box, and there seems to be some issue updating the firmware because of some Swisscom idiosyncrasy (again) but at least internet works properly.