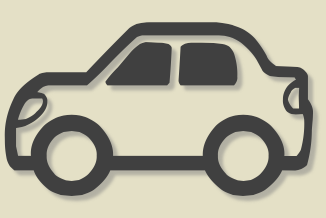 Self-driving cars are one of the these impressive science-fiction ideas, that are nowadays technically possible, will we soon see such cars around? Wide deployment depends on two things: that such car work, and that society accepts them, both socially and legally. In my opinion there is a significant legal problem in self driving cars: they will need to respect the law.

One of the theoretical aspects of the driving exam in Switzerland is breaking distances. The rule says that it should be the distance covered by the car in two seconds. When driving on a highway at 120 Km/h (33⅓ m/s), this represents 66 meters. This distance is meant for perfect conditions, in case of wet roads, it should be increased.

Take any crowded highway and you will notice that the distance between cars is much smaller. Strictly speaking, all these cars are not respecting the law, but that law is not really enforced, so nobody cares. In case of accident, the guy behind is generally responsible, and the average driver seems OK with this risk. Same goes for speed limits: people drive faster that the limit, and live (and die) with the risks and the consequences.

Now introduce self driving cars into the picture, the first obvious question that will arise is: who is responsible in case of accident? When the car is driving by itself, it can hardly be the driver, so the ultimately the manufacturer of the car will be responsible. Of course, there will be clauses that waive that responsibility in case of unavoidable accidents (say a bridge collapses), but such waiver will imply that the car strictly respects the law.

The law can be changed, in particular for self driving cars that have more advanced sensors, can coordinate with each others. This will require some serious work, both on the legal front and the technical front. So while self driving cars are technically possible, I don’t expect them to be usable in real european traffic soon…

5 thoughts on “About self driving cars…”