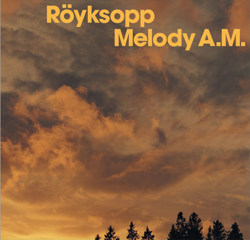 I already mentioned Röyksopp in the comments of my post on Trentemøller, so as I have just bought Melody AM, I though I would talk a little bit about this Norwegian band. I discovered Röyksopp with the single What Else Is There? which can be streamed from their web site, and bough the second album The Understanding. Röyksopp’s music could be described as electronic trip-hop, the music is very smooth. Compared to Trentemøller the style is certainly lighter. The music is very easy listening, some would say poppy, many tracks were used for advertisement.
Melody AM was the first studio album and is less refined, but contains very interesting tracks: Eple could be officially declared the clubbing start hymn, my favorite is probably A higher place. I would recommend both this album and the The Understanding to any person who likes trip-hop electronica.