How can you drown in heavy water? 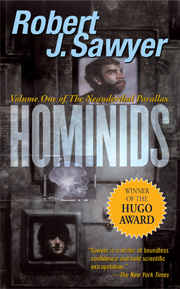 I recently finished reading Hominids by Robert J. Sawyer. I generally like science-fiction, and a Hugo Award is generally nothing to sneeze at, but I was somehow disappointed.

The general idea is interesting: following a freak accident, a individual from a dimension where homo sapiens became extinct and neanderthal dominated is teleported into this world. The book tells two stories, on one hand the investigation on the neanderthal side where one person is missing and on the other hand the story of what happens to this neanderthal in our dimension. Of course both stories connect both a the beginning and the end.

I would not say that the book is bad, but not worth a Hugo Award in my opinion. While the story is interesting, I found both the science and the character weak. The story begins with the neanderthal teleported with some air into a sensor full of heavy water. In the story he nearly drowns. I seems to me that any person immersed in heavy water would float very easily, as they are much lighter than the liquid they are swimming in. Not that it really matters to the story, but it is typical of my feeling of the science in this book: not very convincing, it often distracts more than it helps the story.

The characters are in my opinion the main weak point of this book. When among a cast of characters, the ones I can relate to are not humans, there is a problem. The characters on the neanderthal side are very naive, but at least I could clearly distinguish them in my mind and there is at least some form of conflict going on. The same could not be said of human side: the characters seem bland, with no real interaction going on between them. One of them, the geneticist, get raped in the beginning of the story, but this rape does not bring any character development, the only point is to act as a contrast with the neanderthal society. Except for this rape, there is not much going on between the characters: many of them are physicists whose work instrument was blown up at the beginning of the story, you would think they would worry about reports, funding issues, but they don’t. The whole discussion on contributions takes place on the neanderthal side.

I suspect that my mixed feelings about this book reflect the change in my expectations on books. I like science fiction, but my tolerance for books which are basically thought experiments with some plot and some vague characters is getting lower. This is not say that I did not enjoy reading the book, but I don’t think I will buy the other in the Neanderthal Parallax series…