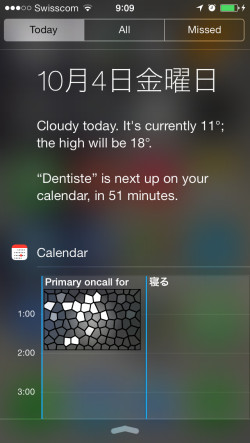 The new version of the operating system for Apple’s iDevices came out while I was traveling in Ireland. I was in no hurry to install, I don’t like changing my system while away from home, and in my many cases it is wiser to wait for version x.x.1, which fixes the usual bugs that plague the first massively deployed version of software, in the present case, screen lock security issues.

Still in installed iOS7 on my iPhone 5. The most striking difference is certainly the new look of the UI, closer to what Android and Windows 8 look like: flat surfaces, thinner fonts, more geometric and abstract look. There were a lot of discussion about skeuomorphism and Jonathan Ive’s style, for me this is just the logical step for devices with high-screen resolution: try to use those pixels as efficiently and clearly as possible. This is probably a general trend in design those days.

I found this change refreshing, it gave me the impression that the screen had been replaced with a cleaner one. Under the skin, there were not so many changes, mostly incremental changes, which is fine for me. I appreciated the new control center, which follows Android’s lead but add some common used tools: calculator, torchlight and timer. I use the timer a lot for cooking or the laundry. The new notification center is also a nice improvement, less a fighting place for rowdy apps, more a synthesis of what is going to happen during the day. I like the fact that the information from the alarm clock are merged, so I know that I’m going to be woken up at 8:00 with a first meeting at 10:00. Nothing ground-breaking but nice, at this stage I don’t really want the way I use my phone to be change, but small improvements in my daily routine task are always welcome.

Siri voice dictation also seems to work much better for me, the various speech recognition softwares always seemed to have trouble with my weird accent, I was able for the first time to dictate an e-mail in english an send it using voice commands. More than ten years after I had my first fixed phone that claimed to be able to recognise my contact’s name and dial the correct number, this technology is finally becoming mature.

Under the hood, it seems most of the improvement in iOS are related to games: game controllers, spriting API, etc. Not immediately useful for me, but we will see how games use these, I certainly use my phone more often for gaming than my PS3, and I certainly will not buy a PS4, so I’m curious to see in what direction Apple will push gaming.