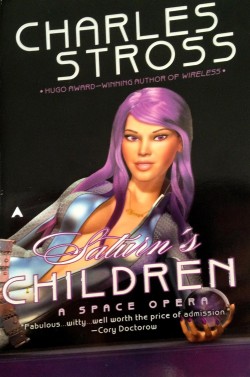 Rewriting some books as an homage is as old as literature itself, yet the exercise is rarely as good as the original. Saturn’s Children by Charles Stross is dedicated to both Robert A. Heinlein and Isaac Asimov, the book feels like Stross decided to rewrite Friday by incorporating the core idea of Asimov’s robotic laws. Stross has the skills, Chilren of Saturn is that book, faster, stronger, better.

Saturn is the god of the day after Friday, and the characters of the book are all children of humanity: robots. Humans have died out, and their robotic slaves continues to reach for the stars, following the human’s orders, slaves to the only surviving persons: corporations. The main character, Freya Nakamichi 7 is the most useless robot of that age, bearing the name of a nordic love goddess, she is a sex robot.

After ruffling feathers with the wrong people, Freya starts working as a courier, transporting illegal goods within her body, while in the background various organisations plot to recreate a bona-fide human. While the main character echoes Heinlein’s Friday, the universe felt closer to Michael Swanwick‘s Vacuum Flowers, space stations and wetware chips, the background conspiracy is a mirror of the last Foundation Books, when the human search for the lost robots. The book also has its share of anime references: one of ruling robot type is the Bishōjo.

Saturn’s Children is certainly an homage, but it is an extremely good one, I could not drop the book and read in within two days, the story is griping and interesting. Stross makes, as usual, interesting observations: what would happen if our society would run on auto-pilot, what would be the impact on humanity of having access to robotic slaves, how would robots modelled after humans think?