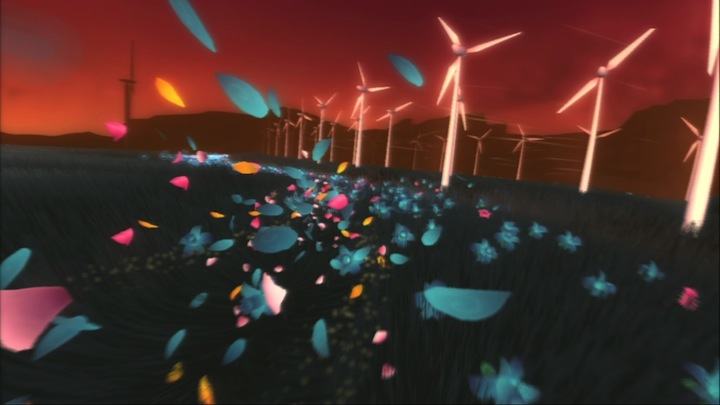 When it came out, in 2010, Flower had excellent reviews, the game sounded promising, and then I forgot about it. I recently bought it and played the first three levels of the game. Flower is a pretty strange video-game, there is nearly no explanations, and the game is not very directive you control a swirl of flower petals, and you fly around in some landscape, touching other flowers that will bloom, giving you more petals. Making certain clusters of flower blooms make other flower grows, brings to life some part of the scenery: tree flourish, rocks move, windmills start turning. The level ends once all its parts are activated.

I found the game very soothing, while the graphics are pretty simple, they are gorgeous, and get the important thing right, the effect of the wind in the grass, because whatever the title says, this game is about wind in the grass. I also liked the way a button press influences both the speed and the camera view, as if the viewer would take a step back to blow the petals. While the game is not really fast, it is neither so slow as to become boring.

In conclusion, a nice, calm game, that is available for download for around 10 CHF.