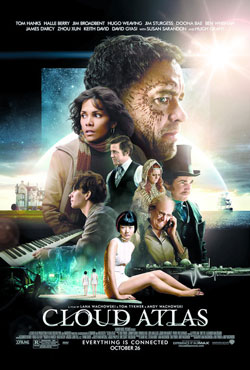 One of the few things you can do in a long-haul flight is to watch movies, among them, Cloud Atlas by the Wachowski siblings. I had only seen a trailer sometime last year and was generally to busy to hear about the various critiques of the movie, the explanation in the in-flight entertainment system was more confusing that anything else, so I was just curious.

Cloud Atlas is a set of stories in different times and place: a lawyer sailing back home in the 19th century, a young gay composer trying to make his way in the early 20th in England, century, a journalist in the US 60’s, a retired editor’s misadventures in the present day, a clone’s interrogation in some science fiction Korea and an epic quest in some post-apocalyptic earth. The various stories are connected first because of some birthmark that is common among all characters and some references from one story to the other.

A colleague found the story confusing, but I suppose that having read way to much cyberpunk novels, multi-threaded narration is not really a problem for me. I really like the idea of the movie, movies which are too new-agy tend to irritate, but here this was kept at a reasonable level, I also like the fact that the tone was not to moralising. I found the visuals gorgeous, and liked the acting, which also meant that the fact the same actors were present in the various story-strands was not too obvious.

My main problem with the movie is that it is slow, way to slow. Watching a movie that is nearly three hours long is OK when you are in a long flight, but still, there were a lot of places that could have been cut in a tighter fashion, in particular in the post-apocalyptic and the science-fiction story. I don’t think that those days, people really need twice as much exposition just because the setting is science-fiction. This slow pace also undermined the connection between the stories, I feel that shorter chunks, a better multiplexing, would have helped glue the various pieces together better.

In conclusion a good film that could have been much better had it been cut tighter. A must see for fantasy-lovers, but probably not a recommendation for people who don’t have the patience of looking at a three hour long movie.