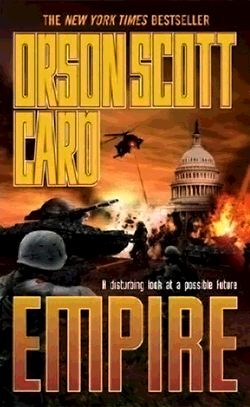 Saturday I was sick to the point to go to the permanency, my general cold had changed into an otitis and it hurts. I had taken a book for the waiting room, so I have started reading Orson Scott Card’s “Empire”. I generally like Orson Scott Card, without being a devout fan, but I had reasonably high expectation of the book. Once I got home I did something I rarely do, I went online and checked the reviews. I was full of doubts, was it because of my sorry state, or was this book, just, not good? One review gave me a hint: that the afterword of the book explained its nature, an essay on a political thema designed for a TV show. One review claimed that the book’s problem was that it is too leftist. In my opinion, it is just bad.

I agree with the author that the US political landscape is way to polarized, and I could certainly imagine a civil war tearing up the United States. I also do not have an intimate knowledge of the history of that country and would be interested in learning more on the subject. All this to say, that I would certainly be receptive to the whole thema of the book. The problem is that you can write an essay on US politics in a novel (Neal Stephenson certainly did novels on more esotheric subjects) or you can write the basis for an US TV show. Doing both is not possible, or at least not in the reach of Orscon Scott Card’s talent. The result is just a book with a lousy plot, bad characters and no depth.

The heroes are basically two top military guys, good US citizens, willing to lay down their lives for the constitution. One of them is married with a perfect wife that choose to raise their kids instead of being an aid to a senator. I would claim that Orscon Scott Card was channelling the late Heinlein, except that if this were the case the characters would have some depth, some interesting theories to tell. This is not the case. In fact the characters are so wooden that when the first good guy died, I was relieved because from now on, there was no risk of me mixing them up. The first guy is a croatian who married a serb girl (or the reverse), the second is an american whose father died. Not that I cared. There is also a supporting cast of good buddies of the hero to help both good guys A and B. The gang communicates in farsi, I suppose this is to show that they know about foreigners and stuff. The group also includes a black guy, but no girl. I think I have seen computer game characters that were more interesting. In the background there is also a smart university professor who explains everything and manipulates everybody until the end of the book – that bit I guessed somewhere in the first chapter. He ends up being elected president of the US by both parties, he also feels like the projection of the author into the book. He is supposed to be very smart, but his intelligence has clearly been calibrated for US TV show level, so don’t hold you breath.

The plot is riddled with holes and coincidence to the point where the characters themselves have to comment on the fact they are coincidences, never a good sign. Basically Rube (good guy A) writes potential scenarios to kill the president for helping counter-insurgency. Except the bad guys implement the scenario first (Hello “Six Days of the Condor”). Cole is the new good guy that will work with good guy Rube. They just happen to be near the white house when the attack is played out, they manage to kill one of the bad guys, but not the second. President gets killed, vice-president too (it was really a good plan). The two good guys try to avoid being framed, go to the media – which are not so bad guys in the end – the two good guys and family hide at the grand-mother’s place in the country side, except before going to mess on sunday morning, they want to go and see ground zero, where they get attacked by giant robots that shoots down everybody who wears an uniform… I’m not making that stuff up! The rest of the plot does not make much more sense, people go to places to get boxes and get killed, but they don’t really need them (the boxes), people are traitors for no clear reason, but the new President is in his heart a good guy, and avoids to much slaughter between good US citizens, by phoning the right guys. The story ends with a commando attack on the bad guy’s secret base, because this is clearly how civil wars are stopped.

So what about the political bits? Besides the professor’s initial lecture (a rant on the Roman Empire, not ground-breaking) the material again is very thin. Basically after the president is killed, the right wing and the army prepare for a coup, only to be preempted by a right-wing coup staged by a millionaire in a secret base in a artificial dam (no, the bad boss has no cat). The characters talk a lot about other civil wars, in England, in Yugoslavia, and the previous civil war in the US, but nobody goes to some depth, like discussing distribution of resources, or the secession of a part of the country because it disagrees with the decisions of the central government, or the problems related to the way elections are done, you know underlying reasons for civil wars. No, we have a James Bond bad guy doing a coup because he though the previous election was rigged – there is nothing deeper, no data, no discussion, just a badly done James Bond plot with less sexy girls, and no real bad guys, because in their hearts all the people involved are good american people – except the terrorists in the beginning, but they are never mentioned again. Who the hell blew up the White House in the first episode remains a mystery. Don’t expect anything about stuff outside the US, it only contains terrorists (to be killed) and weak diplomats (to be despised). Painful questions, like in the event of a civil war, who owes the US’s huge foreign debt are of course of no concern. But then again the giant robots could be build fully in the US without any involvement of foreign technology, so this is clearly science-fiction.

In conclusion this is in my opinion a bad book. Whatever Orson Scott card was trying to achieve with this book, failed. In fact I only felt this was a book by him because you can still feels his obsession with über-people and his religious slant. The book is already dated: it was written in 2006, but now that the US’s economical might has been crippled, the whole US empire discussion of the smug professor sounds like delusions.