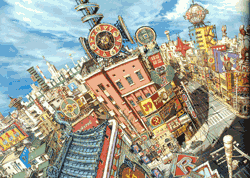 I watched the animation movie Tekkonkinkurīto, I did not know the manga. The graphical style and the music are very impressive, I really loved the movie.

The core of the movie is a japanese town district called , literally treasure town. Set sometimes in the 60s or the 70s, the district is the battleground between the police, the yakuza and the street urchins. The main characters are two kids called (black) and (white). While they battle, the old style district with its market streets is getting demolished to make place for an amusement park.

Besides the gorgeous depiction of those old style streets, the movie is interesting because the story follows the path of various characters, the dichotomy of black and white, but also the ageing yakuza (rat), his younger lieutenant, the ambitious new guy (snake) and his dragon goons, the old tramp and various gangs. In the background lurks the mythological Minotaur. The movie gracefully mixes realism and fantastic elements, with a really symbolic end-sequence.

I found it interesting that the movie was directed by Michael Arias, which is one of the first non-japanese animation directors, maybe because of this, the movie is a loving depiction of post-war city districts, with their alleys and their stalls, they have nearly all disappeared now.

All in all, a very good movie, which I really recommend.