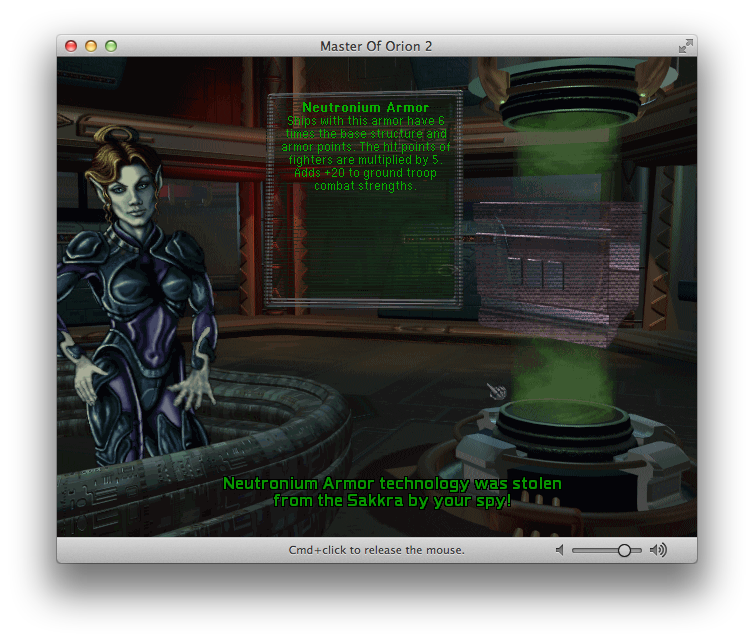 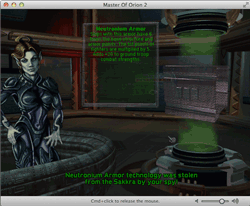 A mentioned a few weeks back that Good Old Games had released a Mac OS X port of Dungeon Keeper, they have now released Master of Orion 2: Battle at Antares, a game from 1996, which was one my favourite games of the time. I already mentioned an iOS clone: Starbase Orion, but this is the original game in its VGA colour glory. The big irony is that there was a Mac OS port, but what is running on my current Mac is not based on that codebase, instead it runs the DOS version within an emulator (DOS-Box), as with Dungeon Keeper the game is neatly packaged as a single, 352.4 MB Mac OS X bundle, with everything included. I bought the bundle that also includes Master of Orion 1 and the soundtrack for $5.99, but it seems it is now sold for $2.99.

In Master of Orion II, you control one species that races to take control of the galaxy. While the species are pretty cliché, the game is interesting because there are multiple modes of interactions with the other species, warfare, spying, cooperation. You can also win the game in multiple ways: total domination, get yourself elected in the galaxy council, or defeat the mysterious people from antares – the annoying guys that randomly pillage your systems and destroy your planets. One interesting aspect of the game is the technology tree, where you can only research one branch, so you typically have to somehow get the other branches, either by trade, spying, or conquest.

Another rich aspect of the game is ship design: different technologies give you different options, which let you design different ships, which in turn let you use different tactics in spatial combat. Sometimes your goal is just to destroy the enemy ships, but sometimes capture is more important, either to get ships for free, or to scrap them and recover the technology they contain.

I mostly playing in windowed mode, and did not try out the network mode. The game is fluid and game play was without issues, I found the music playback choppy at times, but I typically turn it off anyway, so this was not a real issue, in-game sounds work fine. Generally speaking the game feels much faster than on a 486 machine, in particular turn computation. Animations are also much faster, although this means they sometimes look a bit jerky.

All in all, this is a really good port of an excellent game, and I really recommend it to anybody who likes turn-based strategy games.

3 thoughts on “Master of Orion II: Battle at Antares”