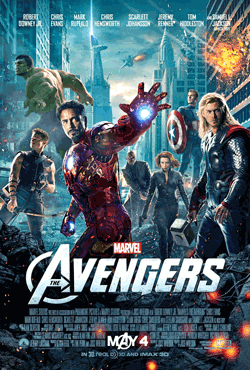 I missed the Avengers while it was playing in theatres, but given the good reviews it received, I had decided to order the Blue-ray at the first occasion. In the end, pre-ordering the thing on amazon ended up not being the fastest way to get it, but I had a lot of other stuff to do, so I completely forgot about the whole thing until the day I received the package.

The Avengers is the latest in the set of movies based on the Marvel comics franchise, many of which I have seen: Iron Man I & II, directed by Jon Favreau (2008. 2010), Thor (2011) directed by Kenneth Branagh and Captain America: The First Avenger (2011), directed by Joe Johnston. The Avenger is the movie where the various parts of the puzzle are assembled under the direction of Joss Whedon, of Buffy and Serenity fame, so the expectations were pretty high.

Building a movie, or even a story around a group is always something tricky, while this is the standard type of narration in roleplaying games, movies and books tend to center or one or two characters. Gluing together characters that have been introduced in movies by other directors is also not simple, the choice of Joss Whedon whose previous stories where pretty good at telling the story of a group was in my opinion a good one.

I would say the movies work reasonably well, I was engaged, I laughed, and the movie is certainly one notch above the previous ones in the franchise. The movie is basically one plot with multiple overlaid groups and relationships, some work, others not so well.

This approach of having a lot of plots thrown into the mix, with the general expectation that some of them will work is again, for me, very reminiscent of role-playing games. What I found interesting is that here it works, I found the movie good despite its weaknesses, and it was a box-office hit.

In summary, a fun super-hero movie, probably the best in the Marvel franchise. I doubt my recommendation will encourage any geek to see that movie, mostly because said geeks probably saw that movie a long time ago.

3 thoughts on “The avengers”